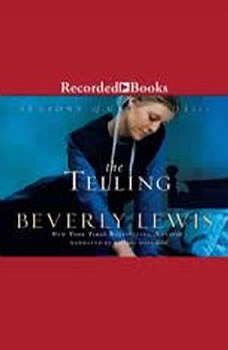 Series: The Seasons of Grace series #3

With The Telling, Christy Award-winning author Beverly Lewis delivers the stirring conclusion to her New York Times best-selling Seasons of Grace trilogy. As an Amish young lady leaves Bird-in-Hand in a fancy car to search for her mother in Ohio, she wonders if her mom really wants to be found. She also hopes her Englisher friend—determined to forgo traditional medicine—can find the healing she seeks. But she has no idea her mom is following clues of her own.

A New Chapter With the demands of Hollywood life behind them for now, Dayne and Katy Matthews continue to adjust to life in Bloomington as they look forward to a new chapter together – expanding their family. Meanwhile, the entire CKT staff i...

Longing, book three in the Bailey Flanigan Series, picks up where Learning ended. After a long and lonely silence from Cody Coleman, Bailey Flanigan becomes closer to her one-time Hollywood co-star, Brandon Paul. Nights on the town in New York City ...

The Reckoning
by Beverly Lewis

Beverly Lewis’ inspirational novels have attracted fans across the country and have been chosen as C.S. Lewis Noteworthy List Books. The Reckoning is the third work in her Heritage of Lancaster County series. Continuing the story of a young wo...

Shades of Blue
by Karen Kingsbury

Brad Cutler, twenty-eight, is a rising star at his New York ad agency, about to marry the girl of his dreams. Anyone would agree he has it all … a great career, a beautiful and loving fiancée, and a fairy tale life ahead of him—w...

This Side of Heaven
by Karen Kingsbury

From New York Times best-selling author Karen Kingsbury comes an unforgettable story of love struggling against all odds to snatch hope from the jaws of despair. Annie Warren’s concern for her adult son Josh has intensified ever since a drunk...

The Bailey Flanigan series begins with Bailey leaving Bloomington for the adventure of a lifetime. She has won an audition for the ensemble of a Broadway musical in New York City. Shea€™s determined to take advantage of this once-in-a-li...

The Missing
by Beverly Lewis

In Beverly Lewis’ enthralling sequel to her New York Times best-selling novel The Secret, two young ladies—one Amish, the other English—join forces to solve the mystery of a mother gone missing and a disease gone wild. Will these ...

A Place of Peace
by Amy Clipston

Take a trip to Bird-in-Hand, Pennsylvania, where youa€™ll meet the women of the Kauffman Amish Bakery in Lancaster County. As each womana€™s story unfolds, you will share in her heartaches, trials, joys, dreams a€¦ ...

A Gift of Grace
by Amy Clipston

Take a trip to Bird-in-Hand, Pennsylvania, where youa€™ll meet the women of the Kauffman Amish Bakery in Lancaster County. As each womana€™s story unfolds, you will share in her heartaches, trials, joys, dreams a€¦...

The Seasons of Grace series Bundle

The Telling
The Seasons of Grace series #3

The Secret
The Seasons of Grace series #1

The Missing
The Seasons of Grace series #2