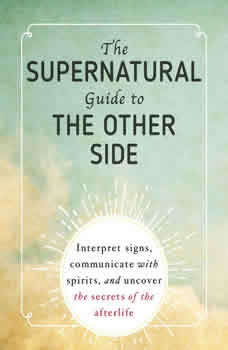 The Supernatural Guide to the Other Side: Interpret signs, communicate with spirits, and uncover the secrets of the afterlife

A comprehensive guide to life after death, filled with information on communicating with spirits, near-death experiences, angels and demons, miracles, and psychics and mediums.What happens after we die? Are ghosts real? And if they are, can we communicate with them? Do miracles really happen? Do angels exist? Even though finding any concrete answers to these questions might be impossible, just the act of wondering brings us one step closer to the truth. The Supernatural Guide to the Other Side explores the possibilities of what awaits us on the other side, with information such as: -Communicating with spirits -Creating psychic shields -How near-death experiences work -Angels, demons, and other phenomena -How to identify signs from the other side While the mysteries of the afterlife baffle and intrigue many, this guide leaves no stone unturned. With this essential primer on the paranormal, you will find everything you need to discover the truth about the other side.

The Demon of Brownsville Road
by Bob Cranmer

The Cranmers seemed fated to own the house at 3406 Brownsville Road. As a young boy, Bob had been drawn to the property, and, just when the family decided to move back to Brentwood, it went up for sale. Without a second thought, they purchased the h...

The Ghost Studies
by Brandon Massullo

You’ve just laid down for the night when suddenly doors slam and the curtains shift. The lights begin to flicker and a white mist forms in front of you. You shut your eyes and keep muttering, “ghosts aren’t real.” But then yo...

Growing Up in Heaven
by James Van Praagh

“[JamesVan Praagh] has changed people’s lives, banished thefear of death, and brought grieving parents the solace of their dead children’spresence . . . It is impossible not to be moved.” —Newsweek “Hereally is a...

In Annie Wilder's uniquely entertaining book, there are uncanny true tales of haunted highways, weird encounters, and legends of the road.It may have happened to you; it's happened to almost everyone who's ever driven down a highway at night, or in ...

The Amityville Horror
by Jay Anson

In December 1975, the Lutz family moved into their new home on suburban Long Island. George and Kathleen Lutz knew that, one year earlier, Ronald DeFeo had murdered his parents, brothers, and sisters in the house, but the propertycomplete with boath...

Based on over twenty-five years of spirit communication and thousands of professional readings, world-famous medium James Van Praagh shares with readers the personal regrets, misgivings, remorse, and, most important, the advice of the dead who have...

The Slenderman Mysteries
by Nick Redfern

It's the dead of night; you are fast asleep. Suddenly, you are wide awake but unable to move. Hunched over you in the shadows is an eight- or nine-foot-tall gaunt entity with spider-thin limbs, dressed in an old-style black suit, its pale face missi...

Field Guide to the Spirit World
by Susan B. Martinez

A comprehensive examination of the many ways the spirit world affects the material plane and our minds • Provides a detailed guide to the Afterlife and its inhabitants • Reveals the spirit influence behind many mental disorders as well as ...