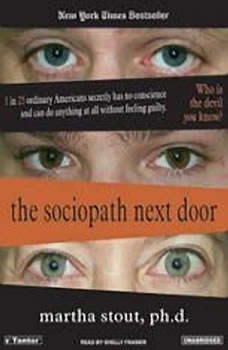 The Sociopath Next Door: The Ruthless Versus the Rest of Us

Who is the devil you know? Is it your lying, cheating ex-husband? Your sadistic high school gym teacher? Your boss who loves to humiliate people in meetings? The colleague who stole your idea and passed it off as her own? In the pages of The Sociopath Next Door, you will realize that your ex was not just misunderstood. He's a sociopath. And your boss, teacher, and colleague? They may be sociopaths too. We are accustomed to think of sociopaths as violent criminals, but in The Sociopath Next Door, Harvard psychologist Martha Stout reveals that a shocking 4 percent of ordinary people—one in twenty-five—has an often undetected mental disorder, the chief symptom of which is that that person possesses no conscience. He or she has no ability whatsoever to feel shame, guilt, or remorse. One in twenty-five everyday Americans, therefore, is secretly a sociopath. They could be your colleague, your neighbor, even family. And they can do literally anything at all and feel absolutely no guilt. How do we recognize the remorseless? One of their chief characteristics is a kind of glow or charisma that makes sociopaths more charming or interesting than the other people around them. They're more spontaneous, more intense, more complex, or even sexier than everyone else, making them tricky to identify and leaving us easily seduced. Fundamentally, sociopaths are different because they cannot love. Sociopaths learn early on to show sham emotion, but underneath they are indifferent to others' suffering. They live to dominate and thrill to win. The fact is, we all almost certainly know at least one or more sociopaths already. Part of the urgency in reading The Sociopath Next Door is the moment when we suddenly recognize that someone we know—someone we worked for, or were involved with, or voted for—is a sociopath. But what do we do with that knowledge? To arm us against the sociopath, Dr. Stout teaches us to question authority, suspect flattery, and beware the pity play. Above all, she writes, when a sociopath is beckoning, do not join the game. It is the ruthless versus the rest of us, and The Sociopath Next Door will show you how to recognize and defeat the devil you know.