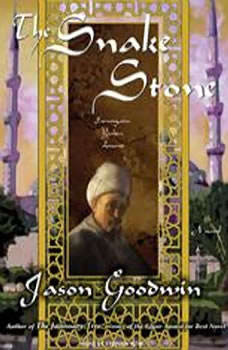 Istanbul, 1838. In his palace on the Bosphorus, Sultan Mahmud II is dying, and the city swirls with rumors and alarms. The unexpected arrival of a French archaeologist determined to track down lost Byzantine treasures throws the Greek community into confusion. Yashim Togalu is once again enlisted to investigate. But when the archaeologist's mutilated body is discovered outside the French embassy, it turns out there is only one suspect: Yashim himself. As the body count starts to rise, Yashim must uncover the startling truth behind a shadowy society dedicated to the revival of the Byzantine Empire, encountering along the way such vibrant characters as Lord Byron's doctor and the Sultan's West Indies–born mother, the Valide. With striking wit and irresistible flair, Jason Goodwin takes us into a world where the stakes are high, betrayal is death—and the pleasure to the listener is immense.

The Bellini Card
Yashim the Eunuch #3

An Evil Eye
Yashim the Eunuch #4