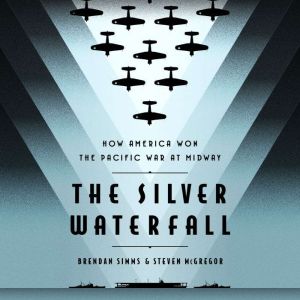 The Silver Waterfall: How America Won the War in the Pacific at Midway

Eighty years after the stunning and decisive battle, a revelatory new history of Midway

​The Battle of Midway was, on paper, an improbable victory for the smaller, less experienced American navy and air force, so much so that it was quickly described as “a miracle.” Yet fortune favored the Americans at Midway, and the conventional wisdom has it that the Americans’ lucky streak continued as the war in the Pacific turned against the Japanese. This new history demonstrates that luck, let alone miracles, had little to do with it.

In The Silver Waterfall, Brendan Simms and Steven McGregor show how the efforts of America’s peacetime navy combined with creative innovations made by designers and industrialists were largely responsible for the victory. The Douglas Dauntless Dive Bomber, a uniquely conceived fighting weapon, delivered a brutally accurate attack the Japanese quickly came to dread.

Told through a vivid narrative, Simms and McGregor show how the course of the war in the Pacific was dramatically altered, emphasizing the crucial combination of a culture of innovation, a brilliant contribution from immigrants, and a vital intelligence coup that allowed the navy to orchestrate the devastating attack on the Japanese and dominate the Pacific for good.