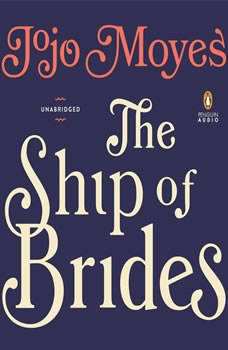 The Ship of Brides

From the New York Times bestselling author of Me Before You and One Plus One, a post-WWII story of the war brides who crossed the seas by the thousands to face their unknown futures

1946. World War II has ended and all over the world, young women are beginning to fulfill the promises made to the men they wed in wartime.

In Sydney, Australia, four women join 650 other war brides on an extraordinary voyage to England—aboard HMS Victoria, which still carries not just arms and aircraft but a thousand naval officers. Rules are strictly enforced, from the aircraft carrier’s captain down to the lowliest young deckhand. But the men and the brides will find their lives intertwined despite the Navy’s ironclad sanctions. And for Frances Mackenzie, the complicated young woman whose past comes back to haunt her far from home, the journey will change her life in ways she never could have predicted—forever.