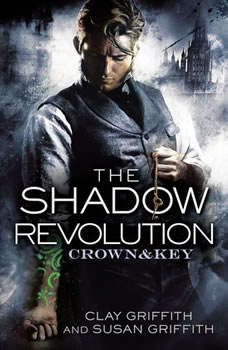 They are the realm’s last, best defense against supernatural evil. But they’re going to need a lot more silver.

As fog descends, obscuring the gas lamps of Victorian London, werewolves prowl the shadows of back alleys. But they have infiltrated the inner circles of upper-crust society as well. Only a handful of specially gifted practitioners are equipped to battle the beasts. Among them are the roguish Simon Archer, who conceals his powers as a spell-casting scribe behind the smooth veneer of a dashing playboy; his layabout mentor, Nick Barker, who prefers a good pub to thrilling heroics; and the self-possessed alchemist Kate Anstruther, who is equally at home in a ballroom as she is on a battlefield.

After a lycanthrope targets Kate’s vulnerable younger sister, the three join forces with fierce Scottish monster-hunter Malcolm MacFarlane—but quickly discover they’re dealing with a threat far greater than anything they ever imagined.

Praise for The Shadow Revolution

“A fast-paced, action-filled dark fantasy that is just sheer fun to read . . . The Shadow Revolution kicks off the Crown & Key series in spectacular fashion!”—Fresh Fiction

"A thrilling read! Clay and Susan Griffith have crafted a gritty, action-packed Victorian-era fantasy world full of dark creatures, mystery, and magic—a must read for steampunk fans!”—Shawntelle Madison, author of the Coveted series

“What happens when you kick off a new urban fantasy series with a fantastic setting and unique characters, and you throw in some dangerous, supernatural creatures, evil madmen, murder and mayhem? You get a kick-ass book to read. . . . I want more, please!”—Book Swoon

“If summer blockbuster action movies existed back in the Victorian era, they would look a lot like The Shadow Revolution. This book doesn’t mess around. . . . Highly recommended.”—The BiblioSanctum

“One hell of a read . . . [With] unforgettable characters and magic around every bend, this truly was a breath of fresh air.”—My Guilty Obsession

“The story is pretty fast-paced, the mystery intriguing and refreshingly surprising, and the action thrilling. [The Shadow Revolution] pulls you in and barely lets you up for air, and I love the intensity of that kind of storytelling.”—Refracted Light

“So good that I won’t be surprised if this book series is opted to be a TV show or movie with an accompanying video game! Great storytelling, great plot and most of all great book!”—Marienela