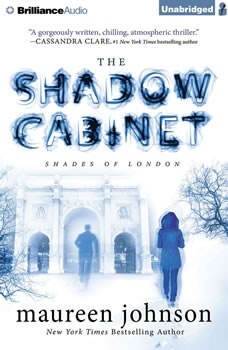 The thrilling third installment to the Edgar-nominated, bestselling seriesAt the end of Maureen Johnson’s New York Times bestselling novel, The Madness Underneath, Rory, Callum and Boo are reeling from the sudden and tragic death of their friend and squad leader, Stephen. The Shadow Cabinet picks up where listeners left off, and now Rory is convinced there must be a way to bring Stephen back. Meanwhile, new dangers arise: Rory's classmate Charlotte is missing, and Jane and her nefarious organization are clearly planning something big—with Rory as their most valuable asset. Time is running out as the ghost squad struggles to protect London and Rory fights to bring Stephen back.