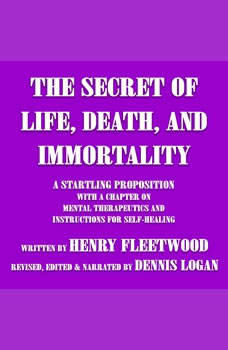 The Secret of Life, Death, and Immortality

Without any attempt to enter the realm of metaphysics, the writer desires to state that he uses the term Life in its absolute or universal sense, and not in the conditioned or limited sense in which it is ordinarily and loosely used. He distinguishes between Life and the resultant of that impulse and energy; whether that resultant be a molecule of hydrogen or what is called consciousness, intelligence, manifesting through an organism called man. This Life is not mind, nor its product matter. It is Substance—and that substance the writer calls electricity. It is eternal. It is the totality of what is, or Be-ing. It has a dual impulse or tendency, viz. (the positive and negative)—attraction and repulsion of its infinite integral constituent particles or ELECTRONS. This attraction and repulsion, this breaking and closing of the circuit, this vibration or motion—always in a straight line or a circle—this infinite eternal polarity, being continuous creation or evolution, and destruction or devolution.It has not been possible in the limited space devoted to this book to attempt a discussion and proof of the statements made herein. While the statements made are scientific and rational the writer could not do more than point out through them the direction in which the truth is to be sought and found. The reader will find many thoughts suggested along the line of the wireless telegraph and telephone, musical vibrations, thought vibrations, telepathy, clairvoyance, “Spiritualistic phenomena,” death, post-mortem consciousness or “Conscious immortality,” etc..

The Language of God
by Francis S. Collins