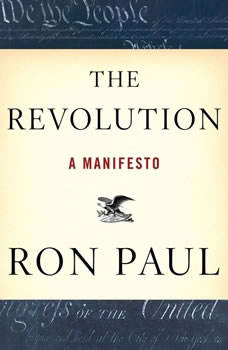 The Revolution: A Manifesto

#1 NEW YORK TIMES BESTSELLERThis much is true: You have been lied to. The government is expanding. Taxes are increasing. More senseless wars are being planned. Inflation is ballooning. Our basic freedoms are disappearing. The Founding Fathers didn't want any of this. In fact, they said so quite clearly in the Constitution of the United States of America. Unfortunately, that beautiful, ingenious, and revolutionary document is being ignored more and more in Washington. If we are to enjoy peace, freedom, and prosperity once again, we absolutely must return to the principles upon which America was founded. But finally, there is hope . . . In THE REVOLUTION, Texas congressman and presidential candidate Ron Paul has exposed the core truths behind everything threatening America, from the real reasons behind the collapse of the dollar and the looming financial crisis, to terrorism and the loss of our precious civil liberties. In this book, Ron Paul provides answers to questions that few even dare to ask. Despite a media blackout, this septuagenarian physician-turned-congressman sparked a movement that has attracted a legion of young, dedicated, enthusiastic supporters . . . a phenomenon that has amazed veteran political observers and made more than one political rival envious. Candidates across America are already running as "Ron Paul Republicans.""Dr. Paul cured my apathy," says a popular campaign sign. THE REVOLUTION may cure yours as well.

I am a libertarian, but not a Ron Paul libertarian. I do know that our founding fathers did not want what we have no, but unlike Mr Paul, our Constitution is flawed enough to allow what we have. No matter, this is an excellent book. I got tired of reading from progressives trashing our Constitution and history, and listening to this regained my faith in this country. Too bad his thinking is way too marginalized, and not mainstream.