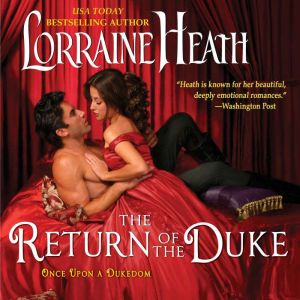 The Return of the Duke: Once Upon a Dukedom

Series: Once Upon a Dukedom #3

In the thrilling third book in New York Times bestselling author Lorraine Heath’s Once Upon a Dukedom series, the dashing son of a disgraced duke teams up with a sultry beauty to thwart an assassination plot against Queen Victoria.

When his father, the Duke of Wolfford, is hanged for an assassination attempt on Queen Victoria, Marcus Stanwick is stripped of everything. Vowing to return honor to his family, he seeks to expose the others involved in the treasonous plot and bring them to justice. His search forces him to turn to a woman he despises for her unforgiveable betrayal—a woman known as the heartless harlot.

Harboring secrets, Esme Lancaster has her own reasons for wanting to discover who’s behind the conspiracy that’s still afoot. She doesn’t trust Marcus but can’t deny the handsome devil makes her wonder if she does indeed possess a heart, one he could very easily steal.

As their hunt for the truth leads them into danger, Marcus finds Esme isn’t cold and calculating as he’d assumed but fire and brimstone, with courage and determination to match his own. Soon, they’re unable to deny their growing desire for each other. But giving into temptation comes at a cost, and they must decide if love is worth the risk of losing their one chance for redemption.