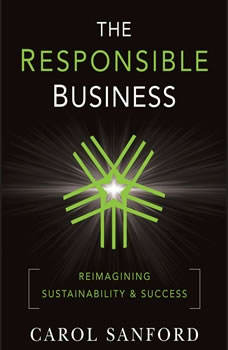 "When most people think of corporate responsibility, they are focusing on a business's effect on and relationship to stakeholders. A Responsible Business sees stakeholders as full partners and meaningful instruments for the evolution of healthier communities and more successful businesses." -from the Introduction The Responsible Business offers a new and strategic approach to doing business that holistically integrates responsibility into all aspects of an organization, allowing for returns at every level, business and social. This book goes beyond the often well intentioned but limited attempts at sustainability to present a framework that allows organizations to bring responsibility into everything they do and re-imagine success. From innovation, product development, and production processes to business management, strategic planning, and shareholder development, the author shows how being a Responsible Business is a practical skill that can be applied day-to-day at every level of the business. No longer just the role of a department or the job of CSR professionals, successful responsibility and business efforts start at the business level, are then taken to the corporate level, and are finally applied throughout the organization. The Responsible Business outlines a framework for building a responsibility and consciousness infrastructure that applies a living systems view to the business and inspires all of its stakeholders, including shareholders. Throughout the audiobook, Sanford demonstrates how to make responsibility integral to all aspects of a business as an engine for innovation, profitability, and purpose.