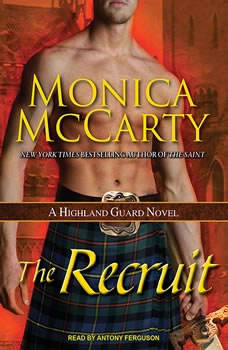 The Recruit: A Highland Guard Novel

Fiery, aggressive, and bold, Kenneth Sutherland is a true champion—skilled with any weapon and driven to win. Now Kenneth is ready for his greatest challenge: joining Robert the Bruce's secret army to fight among the elite. Kenneth's best chance to attain that honor is by winning the Highland Games. Focused and prepared for victory, he is caught off guard by a lovely wisp of a woman—and a stolen moment of wicked seduction. Her innocent arousal and her shameless hunger fire his blood. He will win his place in the guard—and in Mary of Mar's bed. The ruggedly handsome hero-in-the-making stirs a heart that should know better. Mary vows that her surrender will be sport only—no promises, no heartbreak, just one night of incredible passion. Nothing, she swears, will persuade her to give up her hard-wrought independence and put her fate in the hands of another powerful man. But with every gentle touch and heart-pounding kiss, Kenneth makes her want more. Now Mary wants his heart. But is this determined champion willing to surrender everything for love?

The Hunter
by Monica McCarty

Prized for his unbeatable tracking skills, Ewen "Hunter" Lamont accepts a dangerous assignment: locate a missing undercover courier. But this is no ordinary target. Ewen has met his prey before as "Sister Genna," a fiery, forbidden woman forever etc...

The Saint
by Monica McCarty

Magnus MacKay is the ultimate Highlander: tough, proud, able to master any terrain and to best his enemies. Called "the Saint" for his refusal to discuss women, as well as for his cool and steady leadership, Magnus hides a painful truth. It isn't vi...