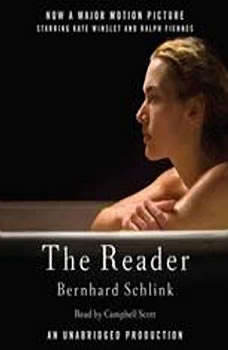 Hailed for its coiled eroticism and the moral claims it makes upon the reader, this mesmerizing novel is a story of love and secrets, horror and compassion, unfolding against the haunted landscape of postwar Germany.

When he falls ill on his way home from school, fifteen-year-old Michael Berg is rescued by Hanna, a woman twice his age. In time she becomes his lover--then she inexplicably disappears. When Michael next sees her, he is a young law student, and she is on trial for a hideous crime. As he watches her refuse to defend her innocence, Michael gradually realizes that Hanna may be guarding a secret she considers more shameful than murder.

I'm not surprised that Oprah picked this book. I thought it was really moving. Such a quick read, too. I would highly recommend it.

Don't get your hopes up over finding out what the even more dire secret is because it was kind of obvious from early in the book and it wasn't anything horrible. The book was well-written but I found it somewhat boring.

When I read this book I thought it was a little perverse once the affair between a teenaged boy and older woman started, but the more I kept reading, I saw how beautifully innocent and moving their relationship became, this is a touching story, it may be boring for some but if you are into romance, I recommend

I couldn't put it down. When the package came, I flipped The Reader open to page 1, started to read, and finished the book at 2 a.m. Compelling! I guessed Hannah's secret early on, but still had to finish the book to see how it played out. I'm debating whether to see the movie, but probably will. I wish I saw more books as well written as this one.