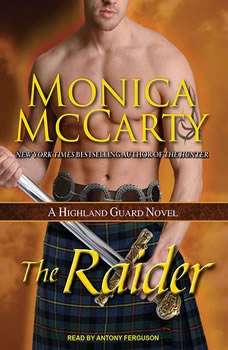 The Raider: A Highland Guard Novel

Of all Bruce's elite warriors, Robert "Raider" Boyd is the most formidable. A true patriot whose bare hands are a deadly weapon, Robbie is the fierce enforcer of the Guard, and his hatred of the English has been honed to a razor-sharp edge. But vengeance proves bittersweet when his enemy's beautiful sister falls into his hands and he finds himself fighting temptation—a battle he badly wants to lose. Lady Rosalin Clifford barely recognizes the rebel prisoner she saved from execution six years ago. Though her girlish ideals for fairness have matured into a passion for justice, Rosalin believes she betrayed her brother when she helped this dangerous man escape. Now her traitorous act has come back to haunt her. But she can't deny the longing this tormented warrior ignites in her, or deny the passion that turns sworn enemies into lovers. Is the gentle love of a true English rose enough to free Scotland's most brutal warrior from a path of vengeance—before it's too late?

Spell of the Highlander
by Karen Marie Moning

Jessi St. James has got to get a life. Too many hours studying ancient artifacts has given the hardworking archaeology student a bad case of sex on the brain. So she figures she must be dreaming when she spies a gorgeous half-naked man staring out a...

The Viper
by Monica McCarty

Prized for his snakelike stealth and deadly strikes, Lachlan "Viper" MacRuairi is a warrior to enlist but not to trust. His only loyalty is to his purse, his indifference sealed by bitter betrayal. All that changes when Lachlan is tasked to protec...