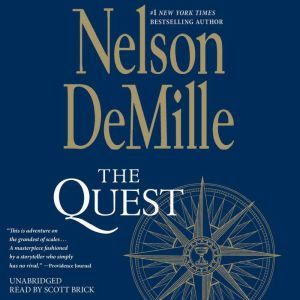 AUTHOR'S NOTE:An earlier, shorter version of The Quest was published in paperback in 1975. In 2013, I rewrote The Quest and doubled its length, making it, I hope, a far better story than the original, without deviating from the elements that made the story so powerful and compelling when I first wrote it. In other words, what made The Quest worth rewriting remains, and whatever is changed is for the better.I was happy and excited to have this opportunity to rewrite and republish what I consider my first "big" novel, and I hope you enjoy it as much as I did when I first wrote it.BOOK DESCRIPTION:A sweeping adventure that's equal parts thriller and love story, Nelson DeMille's newest novel takes the reader from the war torn jungles of Ethiopia to the magical city of Rome.While the Ethiopian Civil War rages, a Catholic priest languishes in prison. Forty years have passed since he last saw daylight. His crime? Claiming to know the true location of Christ's cup from the Last Supper. Then the miraculous happens - a mortar strikes the prison and he is free! Old, frail, and injured, he escapes to the jungle, where he encounters two Western journalists and a beautiful freelance photographer taking refuge from the carnage. As they tend to his wounds, he relates his incredible story. Motivated by the sensational tale and their desire to find the location of the holiest of relics, the trio agrees to search for the Grail. Thus begins an impossible quest that will pit them against murderous tribes, deadly assassins, fanatical monks, and the passions of their own hearts.THE QUEST is suspenseful, romantic, and filled with heart-pounding action. Nelson DeMille is at the top of his game as he masterfully interprets one of history's greatest mysteries.

What a disappointment. I love stories of quests and the holy grail. But this book was so boring. A few random moments of action, mostly boring, repetitive discussions, really bad dialogue.I did not care at all about any of the three main characters. Literally did not care in the end who got the girl.Ending was so anti-climactic. It made me look back on the book and ask myself, what was the point of the story? It may as well have never happened.