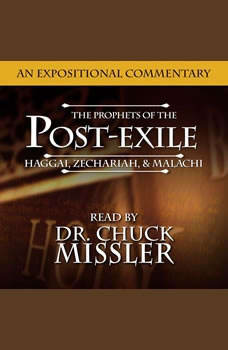 The Prophets of the Post Exile: Haggai, Zechariah, & Malachi

HAGGAI, ZECHARIAH and MALACHIIt is an unfortunate misconception that because these books are called The Minor Prophets, their relevance to our lives is also minor. This couldn't be further from the truth. The richness of life's lessons and our prophetic hope permeate every word. Don't be tricked into missing these overwhelmingly rich studies.In the book of Haggai we see God sending the prophet Haggai to challenge the people to rebuild which led to a significant turning point in their history.Haggia's audience was the remnant. (They were not unbelievers.) They were the right people, living in the right place, wanting to do the right work, and for the right reasons. But their priorities were not right. They were caught up in their own pursuits. They were living for themselves rather than for God's glory. Isn't that us?Zechariah is often called the Apocalypse of the OT, it presents the Messiah as: The Branch who will remove iniquity, The Stone, His Throne, His Temple, The Coming King, The Shepherd, The Triumphal Entry, on a donkey, His Betrayal for 30 pieces of silver, His Crucifixion, and His Second Coming: looking upon me whom they pierced.It also focuses on the Day of YHWH, the return of Israel in unbelief, and their passing through the Great Tribulation; the siege of Jerusalem by the confederated Gentile powers, and their deliverance by King Messiah.Zechariah also gives us the only physical description of the Antichrist in the Scripture. [It also seems to suggest a neutron bomb in Chapter 14.] It also may hold the solution to the enigma of Mystery Babylon and its relation to literal Babylon in prophecy.Malachi means ''my messengers.''Malachi ministered in the fifth-century b.c., about 100 years after Cyrus had issued the decree in 538 b.c. which permitted Jews to return from exile to Judah. The destruction of Edom was affected by the Nabatean Arabs who totally drove out the Edomites between 550 and 400 B.C., setting up their own Idumean state in its place.

The Grammar of God
by Aviya Kushner

Learn the Bible in 24 Hours: Old Test...
by Chuck Missler

The Prophets to the Southern Kingdom:...
by Chuck Missler

Learn the Bible in 24 Hours: New Test...
by Chuck Missler

Learn the Bible in 24 Hours: Old and ...
by Chuck Missler

The Book of Daniel: An Expositional C...
by Chuck Missler