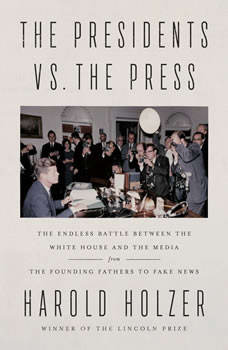 The Presidents vs. the Press: The Endless Battle between the White House and the Media--from the Founding Fathers to Fake News

An award-winning presidential historian offers an authoritative account of American presidents' attacks on our freedom of the press.

"The FAKE NEWS media," Donald Trump has tweeted, "is not my enemy. It is the enemy of the American people." Never has our free press faced so great a threat. Yet the tension between presidents and journalists is as old as the republic itself. From George Washington to Trump, presidents have quarreled with, attacked, denigrated, and manipulated the fourth estate.

Washington groused about his treatment in the newspapers, but his successor, John Adams, actually wielded his executive power to overturn press freedoms and prosecute critical reporters. Thomas Jefferson tapped a reporter to find dirt on his rival, Alexander Hamilton, only to have the reporter expose his own affair with his slave Sally Hemings. (Jefferson denied the reports out of hand—perhaps the first presidential cry of "fake news.") Andrew Jackson rewarded loyal newspapers with government contracts; Abraham Lincoln shuttered critical papers and imprisoned their editors without trial. FDR and JFK charmed journalists in order to protect their personal secrets, while Nixon cast the press as a public enemy for daring to investigate his own.

In this remarkable new account, acclaimed scholar Harold Holzer guides readers through the clashes between chief executives and journalists, showing how these battles were waged and won, while girding us for a new fight to protect our nation's greatest institution: a free and functioning press.