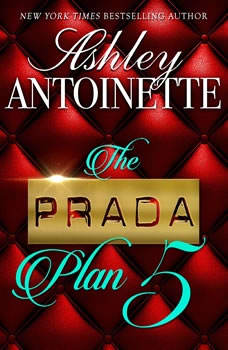 In this explosive addition to the New York Times bestselling series, Ashley Antoinette brings you pain, pleasure, love, hate, as YaYa struggles to hold it all together before life blows up in her face, in The Prada Plan 5.Disaya finally has it all. The man she fought for is hers at last. Her name is Mrs. Indie Perkins and their daughter is safe. Leah is gone. Life is supposed to be good. So why isn’t she satisfied? Why does life suddenly seem so bitter? YaYa’s Prada Plan had worked but with the riches comes pain.She and Indie have grown apart, and with Parker now a permanent fixture in their lives, Indie is pressured to juggle it all. But YaYa’s patience is running thin. Indie is loving her wrong. Her life isn’t what she wants. Her Prada Plan has changed…and now, it’s time to pursue a plan B in order to get what she really wants…