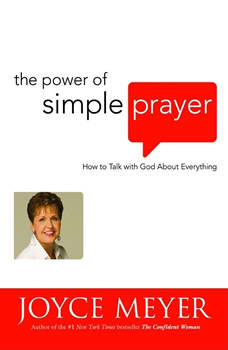 The Power of Simple Prayer: How to Talk with God about Everything

Prayer transforms lives every day.But for those who pray, how manytruly understand its power? In herstraightforward and profound stylebeloved by millions worldwide,Joyce Meyer reveals the incredibleforce that comes through the simpleact of prayer. By explaining thekeys to unanswered prayers, thehindrances to prayer's effectiveness,and the Bible's role in prayer,Joyce gives readers a new perspectiveon how best to communicatewith God. She reveals that throughprayerful conversation comes theability to be successful in life, strong at heart, and sincerewith others. Simple prayer, powerful results.

The Way of the Warrior
by Erwin Raphael McManus

Driven by Eternity
by John Bevere