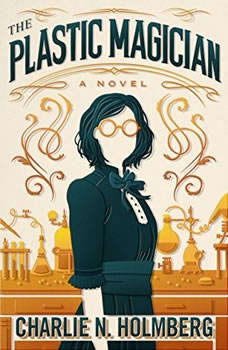 Wall Street Journal bestselling author Charlie N. Holmberg returns to the enchanting world of The Paper Magician. Alvie Brechenmacher has arrived in London to begin her training in Polymaking—the magical discipline of bespelling plastic. Polymaking is the newest form of magic, and in a field where there is so much left to learn, every Polymaker dreams of making the next big discovery.Even though she is only an apprentice, Alvie is an inventor at heart, and she is determined to make as many discoveries—in as short a time frame—as she can. Luckily for her, she’s studying under the world-renowned magician Marion Praff, who is just as dedicated as Alvie is.Alvie’s enthusiasm reinvigorates her mentor’s work, and together they create a device that could forever change Polymaking—and the world. But when a rival learns of their plans, he conspires to steal their invention and take the credit for it himself.To thwart him, Alvie will need to think one step ahead. For in the high-stakes world of magical discovery, not everyone plays fair…

A woman with power over fire and illusion and the enslaved son of a chieftain battle a corrupt empire in this powerful and deeply emotional romantic fantasy from the USA Today bestselling author of Radiance.Every year, each village is required to se...

She Walks in Power
by MaryLu Tyndall

Alexia D'Clere didn't ask to be Protector of the Spear, but after her dying mother gave her the tiny metal object and made her promise to keep it safe, she had no choice. Orphaned at age eight, she began to take over the running of her parent's cast...