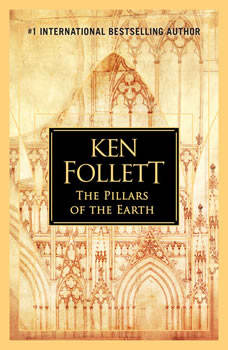 The Pillars of the Earth

If you liked the Century Trilogy, you’ll love the “extraordinary . . . monumental masterpiece.”—Booklist, that changed the course of Ken Follett’s already phenomenal career.

“Follett risks all and comes out a clear winner,” extolled Publishers Weekly on the release of The Pillars of the Earth. A departure for the bestselling thriller writer, the historical epic stunned readers and critics alike with its ambitious scope and gripping humanity. Today, it stands as a testament to Follett’s unassailable command of the written word and to his universal appeal.

The Pillars of the Earth tells the story of Philip, prior of Kingsbridge, a devout and resourceful monk driven to build the greatest Gothic cathedral the world has known . . . of Tom, the mason who becomes his architect—a man divided in his soul . . . of the beautiful, elusive Lady Aliena, haunted by a secret shame . . . and of a struggle between good and evil that will turn church against state, and brother against brother.

A spellbinding epic tale of ambition, anarchy, and absolute power set against the sprawling medieval canvas of twelfth-century England, this is Ken Follett’s historical masterpiece.

I read tons of books and this is the best Ive ever read! I didnt think Id like it, so it sat on my shelf for months, unread. When I had read everything else, I had no choice but to read it. I couldnt put it down!

This book was recommended to me, so I painfully forced myself to continue to read it. The characters were developed well, but the story was so horrible that I was glad when it was finally over.

I loved this book so much I could barely wait for my commute to work to hear more! I am not at all interested in historical detail, but this book is written in such a way that the rich historical background is just as intriguing as the rest of the story and every bit as fascinating!

If you are listening to the audiobook version of The Pillars of the Earth, make sure you do NOT listen to the MP3 version narrated by George Ralph. I wasnt able to listen to the whole book the first time I rented it and had sent it back. Then, when I rerented it, I rented the one with George Ralph as the narrator and he reads it sans any type of performance. I hate to rip into Ralphs narration in general, but Richard E. Grant does a much better job with this one. Ralph sounds like he is just reading the words in the book in front of a microphone, no feeling, it reminds me of a monotone military briefing.