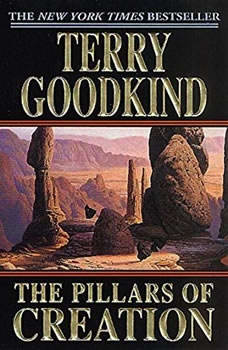 The Pillars of Creation

Tormented her entire life by inhuman voices, Jennsen seeks to end her intolerable agony. She at last discovers a way to silence the voices. For everyone else, the torment is about to begin. Richard Rahl and his wife, Kahlan, have been reunited after their long separation, but with winter descending and the paralyzing dread of an army of annihilation occupying their homeland, they must venture deep into a strange and desolate land. Their quest turns to terror when they find themselves the helpless prey of a tireless hunter. Exploited by those intent on domination, Jennsen finds herself drawn into the center of a violent struggle for conquest and revenge. Worse yet, she finds her will seized by dark forces more abhorrent than anything she ever envisioned. Only then does she come to realize that the voices were real. Staggered by loss and increasingly isolated, Richard and Kahlan desperately struggle to survive. But if they are to live, they must stop the relentless, unearthly threat that comes out of the darkest night of the human soul. To do so, Richard will be called upon to face the demons stalking among the Pillars of Creation.

I have enjoyed the past Terry Goodkind books. Truthfully the series is great, however I am bothered by the politics he brings into the series. It does go from a nice fantasy story to a fantasy story based around american politics. While regardless if you agree with him or not, I felt like at times I was reading a political essay rather than a fantasy novel. I actually gave up on the series after this, because reviews I read said that future books were doing the same, just a bit more than this one. I just perfer to keep real life politics out of fantasy novels. As the author he has that choice however, and other readers might actually enjoy such a thing.

The Pillars of Creation
Sword of Truth Series #7