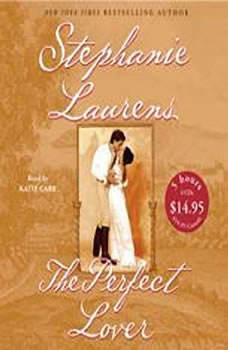 Simon Frederick Cynster has a perfect life -- one of enormous wealth and impeccable social status. His lean handsomeness turns the heads of naïve debutantes, while his sensual allure ensures he never lacks for more sophisticated partners for a night of pleasure.However, Simon accepts that he must find a wife to achieve true contentment. Someone who will spend her days as a member of one of England's most influential families ... and her nights pursuing duties of a more private nature.So he discreetly begins his search at a house party at Glossup Hall ... and is astonished that the lady who immediately captures his interest in Portia Ashford. Simon has never considered Portia as a potential wife, but a heated kiss abruptly alters the rules of their decade-long interaction. As Simon and Portia begin to explore the depths of their mutual passion a shocking murder is committed, and it appears that the next victim will be Portia herself ...Read by Katie Carr.

This book has a thin plot around raw sex. No well bred victorian girl would go to bed withsome just to find out about about sex.

Returned unread when I realized its about 10th in a series. Surely I should read some of the earlier ones first to find out who the heck the Cynsters are..

The Perfect Lover
The Cynster Novels #10

By Winters Light
The Cynster Novels

The Truth about Love
The Cynster Novels