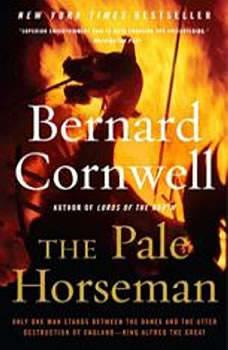 The second installment of Bernard Cornwell’s bestselling series chronicling the epic saga of the making of England, “like Game of Thrones, but real” (The Observer, London)—the basis for The Last Kingdom, the hit BBC America television series.This is the exciting—yet little known—story of the making of England in the 9th and 10th centuries, the years in which King Alfred the Great, his son and grandson defeated the Danish Vikings who had invaded and occupied three of England’s four kingdoms.At the end of The Last Kingdom, The Danes had been defeated at Cynuit, but the triumph of the English is not fated to last long. The Danish Vikings quickly invade and occupy three of England’s four kingdoms—and all that remains of the once proud country is a small piece of marshland, where Alfred and his family live with a few soldiers and retainers, including Uhtred, the dispossessed English nobleman who was raised by the Danes. Uhtred has always been a Dane at heart, and has always believed that given the chance, he would fight for the men who raised him and taught him the Viking ways. But when Iseult, a powerful sorceress, enters Uhtred’s life, he is forced to consider feelings he’s never confronted before—and Uhtred discovers, in his moment of greatest peril, a new-found loyalty and love for his native country and ruler.

..you will be deeply disappointed in this one. Jamie Glover can't hold a candle to Tom Sellwood, the reader of The Last Kingdom, and this abridged version of The Pale Horseman has been edited with a meat cleaver to the point that all of the interesting characters have been squeezed out of the story and you're left with the bare narrative of a mini-novel. I will not continue with HarperAudio's very poor rendering of these great novels, but will actually have to sit down to read them. I recommend that you listen to Tom Sellwood's unabridged reading of The Last Kingdom and STOP THERE!