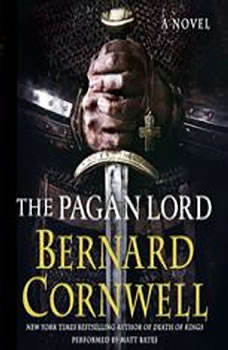 The seventh installment of Bernard Cornwell’s bestselling series chronicling the epic saga of the making of England, “like Game of Thrones, but real” (The Observer, London)—the basis for The Last Kingdom, the hit BBC America television series.At the onset of the tenth century, England is in turmoil. Alfred the Great is dead and his son Edward reigns as king. Wessex survives but peace cannot hold: the Danes in the north, led by Viking Cnut Longsword, stand ready to invade and will never rest until the emerald crown is theirs.Uhtred, once Alfred’s great warrior but now out of favor with the new king, must lead a band of outcasts north to recapture his old family home, the impregnable Northumbrian fortress Bebbanburg.Loyalties will be divided and men will fall as each Saxon kingdom is drawn into the bloodiest battle yet with the Danes—a war that will decide the fate of every king, and the entire English nation.With The Pagan Lord, New York Times bestselling author Bernard Cornwell—"the most prolific and successful historical novelist in the world today” (Wall Street Journal)—continues his magnificent epic of the making of England during the Middle Ages, vividly bringing to life the uneasy alliances, violent combat, and deadly intrigue that gave birth to the British nation.