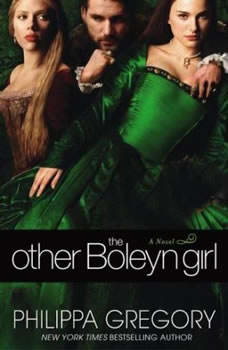 The Other Boleyn Girl

THE MILLION-COPY BESTSELLER...NOW A MAJOR MOTION PICTURE Two sisters competing for the greatest prize: the love of a king. A rich and compelling novel of love, sex, ambition, and intrigue, The Other Boleyn Girl introduces a woman of extraordinary determination and desire who lived at the heart of the most exciting and glamorous court in Europe and survived by following her heart. When Mary Boleyn comes to court as an innocent girl of fourteen, she catches the eye of Henry VIII. Dazzled, Mary falls in love with both her golden prince and her growing role as unofficial queen. However, she soon realizes just how much she is a pawn in her family's ambitious plots as the king's interest begins to wane and she is forced to step aside for her best friend and rival: her sister, Anne. Then Mary knows that she must defy her family and her king and take her fate into her own hands.

#1 New York Times bestselling author and “queen of royal fiction” (USA TODAY) Philippa Gregory brings to life the passionate, turbulent times of seventeenth-century England as seen through the eyes of the country’s most famous roya...

A Respectable Trade
by Philippa Gregory

From the author of The Other Boleyn Girl—a book about the devastating consequences of the slave trade in 19th century England.Bristol in 1787 is booming, a city where power beckons those who dare to take risks. Josiah Cole, a small dockside tr...

The Other Boleyn Girl
The Plantagenet and Tudor Novels