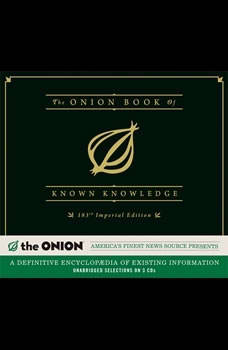 The Onion Book of Known Knowledge: A Definitive Encyclopaedia Of Existing Information

Are you a witless cretin with no reason to live? Would you like to know more about every piece of knowledge ever? Do you have cash? Then congratulations, because just in time for the death of the print industry as we know it comes the final book ever published, and the only one you will ever need: The Onion's compendium of all things known.Replete with an astonishing assemblage of facts, illustrations, maps, charts, threats, blood, and additional fees to edify even the most simple-minded book-buyer, THE ONION BOOK OF KNOWN KNOWLEDGE is packed with valuable information-such as the life stages of an Aunt; places to kill one's self in Utica, New York; and the dimensions of a female bucket, or "pail." With hundreds of entries for all 27 letters of the alphabet, THE ONION BOOK OF KNOWN KNOWLEDGE must be purchased immediately to avoid the sting of eternal ignorance.