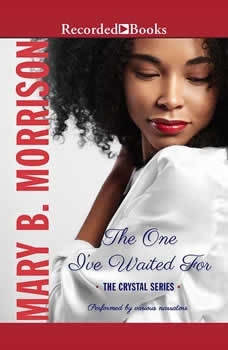 The One I've Waited For

In New York Times bestselling author Mary B. Morrison's unforgettable series, the fiercely sexy Crystal women bring ultimate drama and shattering choices home with a vengeance. Now that she's happily married-for-security, there's nothing Mercedes Crystal won't do to hold on to what she's got. She didn't sweat it when her rich businessman husband had a down-and-dirty ego-boosting affair. But she's not going to stand for him falling in love with luscious Arizona Remington-or Arizona unleashing all kinds of shenanigans to keep him. And Mercedes' take-no-prisoners ways are just what her siblings need to take down all those out to game them. Gorgeous Devereaux Crystal has the hottest show on television that demands the majority of her time. She's in-love with her financially challenged fiance but is tiring of supporting him. Before she walks down the aisle, Mercedes convinces Devereaux to do a background check on Phoenix. The discovery is devastating. Devereaux knows she has to let Phoenix go.and she'll need every weapon imaginable not to take him back. Now with her mother and sisters at her back, Devereaux is flipping the script and turning betrayal into beneficial options. And as the scandalous fallouts threaten all the Crystal women's futures-including sister, Alexis, whose lies are catching up with her, the baby girl, Sandara, whose children's father demand part of her newfound fortune, and matriarch Blake, who's struggling to grab her own happy ending-their bond will be tested past its limits. Narrators: Bishop Banks, Ebony Ford, Angela Lewis, Diana Luke, Kentra Lynn, Isis Washington

The One I've Waited For
Crystal #1

Baby, You're the Best
Crystal #5