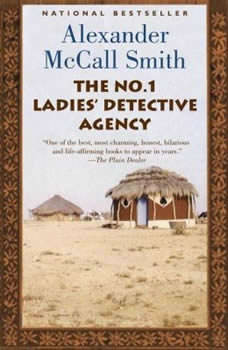 The No. 1 Ladies' Detective Agency

Series: The No. 1 Ladies' Detective Agency #1

This remarkably fresh and charming best-seller took the WD by storm upon its publication. It has since earned two Booker Judges’ Special Recommendations and was voted one of the “International Books of the Year and the Millennium” by the Times Literary Supplement. Mma “Precious” Ramotswe sets up a detective agency in Botswana on the edge of the Kalahari Desert, making her the only female detective in the country. At first, cases are hard to come by. But eventually, troubled people come to Precious with a variety of concerns. Potentially philandering husbands, seemingly schizophrenic doctors, and a missing boy who may have been killed by witch doctors all compel Precious to roam about in her tiny van, searching for clues. Chosen as a Top Ten Mystery by the Organization of Independent Booksellers, U.S.A., The No. 1 Ladies’ Detective Agency is that rare novel that imparts a sage wisdom while inspiring hearty laughter and lasting smiles.

Second Grave on the Left
by Darynda Jones

Second in the Darynda Jones' award-winning paranormal series that's "hilarious and heartfelt, sexy and surprising." (J.R. Ward)When Charley Davidson and Cookie (her best friend/receptionist) have to track down a missing woman, the case is not quite ...

The Kalahari Typing School for Men
by Alexander McCall Smith

International best-selling author Alexander McCall Smith delivers another delightful tale from his critically acclaimed No. 1 Ladies’ Detective Agency series. Precious Ramotswe’s comfortable existence as the only detective in Botswana is...

#1 NEW YORK TIMES BESTSELLER • Something big is brewing in Trenton, N.J., and it could blow at any minute.   Stephanie Plum might not be the world’s greatest bounty hunter, but she knows when she’s being played. Ken Globovic (a...

Whisper to the Blood
by Dana Stabenow

First Grave on the Right
by Darynda Jones

In the Company of Cheerful Ladies
by Alexander McCall Smith

Readers everywhere have been captivated by the New York Times best-selling No. 1 Ladies’ Detective Agency series, from award-winning wit Alexander McCall Smith. Mma Ramotswe is very busy. She has a full caseload at the agency, there’s be...

I love a good detective story, but this one was very different. I wasn't sure what to expect, and I didn't think I would stick past the first CD. BUT... I'm glad that I did. This 'detective' is a very clever woman, and I admire her values. I began to enjoy each story and I felt as though this main character was a good friend. I've decided to read her next book to see if the story of her new life continues. (I won't say what it is, for those of you who want to read this.)

The No. 1 Ladies' Detective Agency Bundle

Get 5% off your total order by adding 3 or more audiobooks from The No. 1 Ladies' Detective Agency

Tears of the Giraffe
The No. 1 Ladies' Detective Agency ...

Morality for Beautiful Girls
The No. 1 Ladies' Detective Agency ...