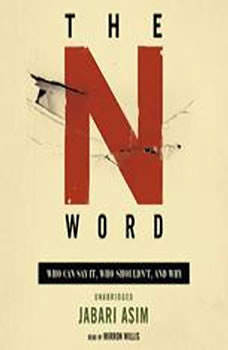 The N Word: Who Can Say It, Who Shouldnt, and Why

In The N Word, a renowned cultural critic untangles the twisted history and future of racism through its most volatile word. The author reveals how the word has both reflected and spread the scourge of bigotry in America and states that only when we know its legacy can we loosen this slurs grip on our national psyche.

A current, constructive, and actionable exploration of todays racial landscape, offering straightforward clarity that readers of all races need to contribute to the dismantling of the racial divideIn So You Want to Talk about Race, editor-at-large o...

Why Are All the Black Kids Sitting Together in the Cafeteria?
by Beverly Daniel Tatum

The classic, bestselling book on the psychology of racism-now fully revised and updated Walk into any racially mixed high school and you will see Black, White, and Latino youth clustered in their own groups. Is this self-segregation a problem to a...

The last book written by King his final reflections after a decade of civil rights strugglesIn 1967, Dr. Martin Luther King, Jr., isolated himself from the demands of the civil rights movement, rented a house in Jamaica with no telephone, and labore...

There Are No Children Here
by Alex Kotlowitz

This New York Public Library selection as one of the 150 most important books of the twentieth century is a truelife portrait of growing up in the Chicago projects. This national bestseller chronicles the true story of two brothers coming of age in...

Professor emeritus at the University of Vermont, James W. Loewen won the National Book Award for his New York Times best-seller, Lies My Teacher Told Me: Everything Your American History Textbook Got Wrong. Sundown Towns examines thousands of all-wh...

The twenty-fifth-anniversary edition of the groundbreaking classic, with a new introductionFirst published in 1993, on the one-year anniversary of the Los Angeles riots, Race Matters became a national best seller that has gone on to sell more than h...

"...Cooper delivers a frank, conversational-style examination of the importance of black female friendships, respectability politics, and harmful stereotypes, among other topics. She blends candor and humor as she roots out toxic behaviors and belie...

A major literary event: a never-before-published work from the author of the American classic Their Eyes Were Watching God that brilliantly illuminates the horror and injustices of slavery as it tells the true story of one of the last known survivo...

The author of Baldwin’s Harlem looks at the evolving culture, politics, economics, and spiritual life of Detroit—a blend of memoir, love letter, history, and clear-eyed reportage that explores the city’s past, present, and future ...