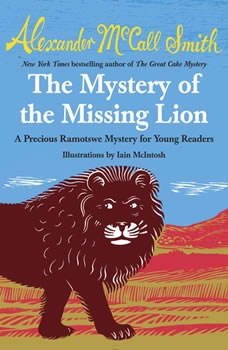 The Mystery of the Missing Lion: A Precious Ramotswe Mystery for Young Readers(3)

A detective in the wild.

Precious Ramotswe gets a very special treat. She gets a trip to visit her Aunty Bee at a safari camp. On her first day in camp, a new lion arrives. But this is no average lion: Teddy is an actor-lion who came with a film crew. When Teddy escapes, Precious and her resourceful new friend Khumo decide to use their detective skills to help track him. They will brave the wilds of the bush—and its hippos and crocodiles—as they try to find where Teddy has gone.

The Mystery of the Missing Lion: A ...
Precious Ramotswe Mysteries for You...

The Mystery of Meerkat Hill
Precious Ramotswe Mysteries for You...