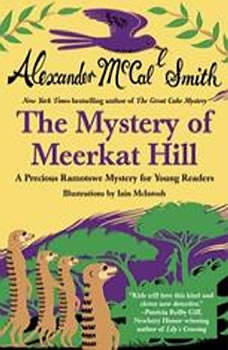 The Mystery of Meerkat Hill: A Precious Ramotswe Mystery for Young Readers

Precious wants to be a detective when she grows up. She is always practicing at being a detective by asking questions and finding out about other people’s lives. There are two new students in her class, a girl called Teb and a boy called Pontsho. She learns that they are brother and sister, and—even more exciting—that Pontsho has a clever pet meerkat named Kosi.

One day, Teb and Pontsho’s family’s cow disappears. Precious helps them look for clues to find the cow. But getting the cow back home will require some quick thinking and help from an unexpected source.

The Mystery of Meerkat Hill: A Prec...
Precious Ramotswe Mysteries for You...

The Mystery of the Missing Lion
Precious Ramotswe Mysteries for You...