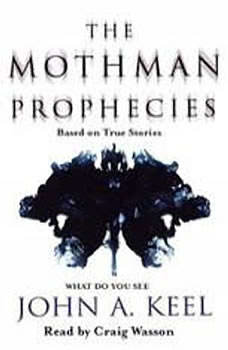 West Virginia, 1966. For thirteen months the town of Point Pleasant is gripped by a real-life nightmare that culminates in a strategy that makes headlines around the world. Strange occurrences and sightings, including a bizarre winged apparition that becomes known as the Mothman, trouble this ordinary American community. Mysterious lights are seen moving across the sky. Domestic animals are found slaughtered and mutilated. And journalist John Keel, arriving to investigate the freakish events, soon finds himself an integral part of an eerie and unfathomable mystery....

A stunning departure, a surprising and compelling return…From Anne Rice, perennial best seller, single-handed reinventor of the vampire cosmology--a new, exhilarating novel, a deepening of her vampire mythology, and a chillingly hypnotic myst...

Prince Lestat and the Realms of Atlantis
by Anne Rice

From Anne Rice, conjurer of the beloved best sellers Interview with the Vampire and Prince Lestat, an ambitious and exhilarating new novel of utopian vision and power  "In my dreams, I saw a city fall into the sea. I heard the cries of thousand...

The World of All Souls
by Deborah Harkness

Shadow of Night
by Deborah Harkness

The #1 New York Times–bestselling sequel to A Discovery of Witches, book two of the All Souls Trilogy—“as enchanting, engrossing, and impossible to put down as its predecessor” (Miami Herald) J. K. Rowling, Stephenie Meyer, A...

In this spirited sequel to the acclaimed The Rook, Myfanwy Thomas returns to clinch an alliance between deadly rivals and avert epic -- and slimy -- supernatural war.When secret organizations are forced to merge after years of enmity and bloodshed,...

A body is found in the attic of a fabulous Long Island estate.There is a claw print scorched into the wall, and the stench of sulfur chokes the air.When FBI Special Agent Pendergast investigates the gruesome crime, he discovers that thirty years ag...

The Vampire Chronicles continue with a riveting, rich saga--part adventure, part suspense--of Prince Lestat and the story of the Blood Communion as he tells the tale of his coming to rule the vampire world and the eternal struggle to find belonging,...

A Discovery of Witches
by Deborah Harkness

A richly inventive novel about a centuries-old vampire, a spellbound witch, and the mysterious manuscript that draws them together. Deep in the stacks of Oxford's Bodleian Library, young scholar Diana Bishop unwittingly calls up a bewitched alchem...

There is some very interesting content in this book, but at times it is excessively wordy and progresses slowly. It's more about Keel's paranormal research during this time, as the Mothman is not mentioned in several chapters. It would be better if less important details were not included.