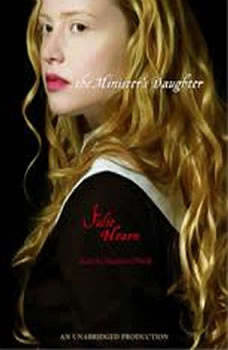 Conceived on a May Morning, Nell is claimed by the piskies and faeries as a merrybegot, one of their own. She is a wild child: herb gatherer and healer, spell-weaver and midwife . . . and, some say, a witch.
Grace is everything Nell is not. She is the Puritan minister’s daughter: beautiful and refined, innocent and sweet-natured . . . to those who think they know her. But she is hiding a secret–a secret that will bring everlasting shame to her family should it ever come to light.
A merrybegot and a minister’s daughter–two girls who could not have less in common. Yet their fates collide when Grace and her younger sister, Patience, are suddenly spitting pins, struck with fits, and speaking in fevered tongues. The minister is convinced his daughters are the victims of witchcraft. And all signs point to Nell as the source of the trouble. . . .
Set during the tumultuous era of the English Civil War, The Minister’s Daughter is a spellbinding page-turner–stunning historical fiction that captures the superstition, passion, madness, and magic of a vanished age.

How I Live Now
by Meg Rosoff

“Every war has turning points and every person too.”Fifteen-year-old Daisy is sent from Manhattan to England to visit her aunt and cousins she’s never met: three boys near her age, and their little sister. Her aunt goes away on bus...

The FitzOsbornes in Exile
by Michelle Cooper

Michelle Cooper combines the drama of pre-War Europe with the romance of debutante balls and gives us another compelling historical page turner.Sophia FitzOsborne and the royal family of Montmaray escaped their remote island home when the Germans at...