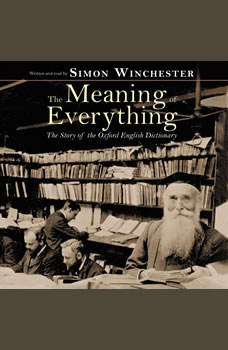 The Meaning of Everything

From the bestselling author of The Professor and the Madman, The Map That Changed the World, and KrakatoaWriting with marvelous brio, Simon Winchester first serves up a lightning history of the English language and pays homage to the great dictionary makers from Samuel Johnson to Noah Webster before turning his unmatched talent for storytelling to the making of the most venerable of dictionaries – The Oxford English Dictionary. Here the listener is presented with lively portraits of such key figures as the brilliant but sickly first editor Herbert Coleridge, the colorful, wildly eccentric Frederick Furnivall, and the incomparable James Augustus Henry Murray, who spent half a century as editor bringing the project to fruition. Winchester lovingly describes the minutiae of dictionary making, brings us to visit the unseemly corrugated iron shed that Murray grandly dubbed The Scriptorium, and introduces some of the legion of volunteers, from Fitzedward Hall, a bitter hermit obsessively devoted to the OED, to the murderous W. C. Minor, whose story is one of dangerous madness, ineluctable sadness, and ultimate redemption.The Meaning of Everything is a scintillating account of the creation of the greatest monument erected to a living language.

A Moveable Feast
by Ernest Hemingway