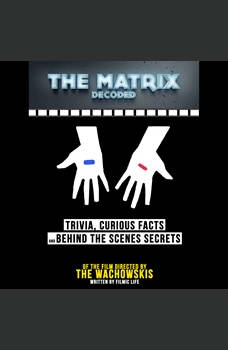 The Matrix Decoded: Trivia, Curious Facts And Behind The Scenes Secrets – Of The Film Directed By The Wachowskis

THE MATRIX DECODED: TRIVIA, CURIOUS FACTS AND BEHIND THE SCENES SECRETS – OF THE FILM DIRECTED BY THE WACHOWSKISWRITTEN BY: FILMIC LIFEDo you think you know everything about THE MATRIX?Do you want to know more than 100 curious facts and secrets of The Wachowskis film?This audiobook is full of information about one of the best movies of the year 1999. You will find details of the behind the scenes that you will REALLY love. You can test your knowledge about this movie here.?? HERE SOME EXAMPLES ??“Thomas Anderson was a character that did not fit his “real” world. To convey that sensation to the public, Keanu Reeves had to wear inappropriate and battered clothes for the scenes filmed in the real world.”“It took six months of planning for the Morpheus rescue scene by helicopter.” “The role of Neo was offered to Leonardo DiCaprio, who rejected the offer because he did not think it was a good idea for a film to have so many special effects.”“2199 is the year in which the events of the plot take place.”“The Wachowskis sisters claimed that they would make the decision to take the blue pill if they were in Neo's situation.”AND MUCH MORE!So, if you want to relive the memories of this great movie or just want to be entertained and learn more about it, do not hesitate to purchase this audiobook!

I Am C-3PO
by Anthony Daniels

How Not to Make a Short Film
by Roberta Marie Munroe

Down and Dirty Pictures
by Peter Biskind