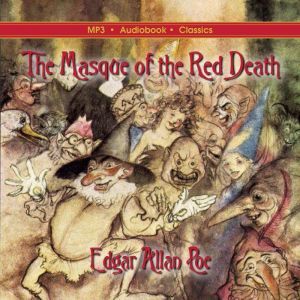 The Masque of the Red Death

First published in 1842, The Mask of the Red Death by Edgar Allan Poe is an allegorical short story in the Gothic horror vein. It is the 15th century. An unidentified country is infected with a contagion known as the Red Death. Half the population has succumbed to a quick, gory, and painful death. Prospero, the prince, deals with the situation by inviting a thousand of his to revel with him in a palace designed with seven rooms located in a secluded abbey. Each of the rooms, which are arranged east to west, are decorated with a monochromatic color scheme, and lit only by a brazier in the hallway which casts light through a stained-glass window. The last room to the west is decorated in black and contains a large clock that strikes heavily on the hour with a tone that stops the musicians from playing and the dancers in their tracks. As the midnight hour approaches a tall figure enters wearing a funeral shroud and a mask resembling the countenance of a corpse. All are terrified; some seek to fend off the intruder, to no avail. They discover there is nothing beneath his robes and mask. And then…