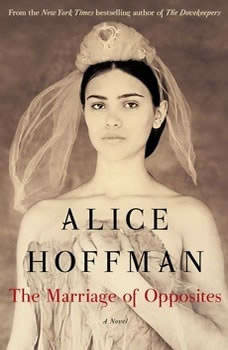 The Marriage of Opposites

From the New York Times bestselling author of The Dovekeepers and The Museum of Extraordinary Things: a forbidden love story set on the tropical island of St. Thomas about the extraordinary woman who gave birth to painter Camille Pissarro—the Father of Impressionism.Growing up on idyllic St. Thomas in the early 1800s, Rachel dreams of life in faraway Paris. Rachel’s mother, a pillar of their small refugee community of Jews who escaped the Inquisition, has never forgiven her daughter for being a difficult girl who refuses to live by the rules. Growing up, Rachel’s salvation is their maid Adelle’s belief in her strengths, and her deep, life-long friendship with Jestine, Adelle’s daughter. But Rachel’s life is not her own. She is married off to a widower with three children to save her father’s business. When her husband dies suddenly and his handsome, much younger nephew, Frédérick, arrives from France to settle the estate, Rachel seizes her own life story, beginning a defiant, passionate love affair that sparks a scandal that affects all of her family, including her favorite son, who will become one of the greatest artists of France. Building on the triumphs of The Dovekeepers and The Museum of Extraordinary Things, set in a world of almost unimaginable beauty, The Marriage of Opposites showcases the beloved, bestselling Alice Hoffman at the height of her considerable powers. Once forgotten to history, the marriage of Rachel and Frédérick is a story that is as unforgettable as it is remarkable.

You are about to travel to Edgecombe St. Mary, a small village in the English countryside filled with rolling hills, thatched cottages, and a cast of characters both hilariously original and as familiar as the members of your own family. Among them ...

South of Broad
by Pat Conroy

#1 NEW YORK TIMES BESTSELLER • “A big sweeping novel of friendship and marriage” (The Washington Post) by the celebrated author of The Prince of Tides and The Great Santini   Leopold Bloom King has been raised in a family ...

From master storyteller Carlos Ruiz Zafón, author of the international phenomenon The Shadow of the Wind, comes The Angel’s Game—a dazzling new page-turner about the perilous nature of obsession, in literature and in love.“The...

Circling the Sun
by Paula McLain

NEW YORK TIMES BESTSELLER • NAMED ONE OF THE BEST BOOKS OF THE YEAR BY NPR, BOOKPAGE, AND SHELF AWARENESS • “Paula McLain is considered the new star of historical fiction, and for good reason. Fans of The Paris Wife wi...