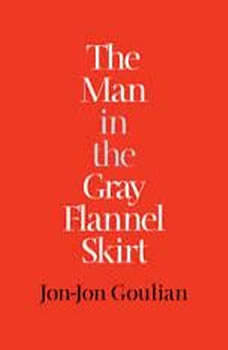 The Man in the Gray Flannel Skirt

The vibrant, funny, and heartwarming story of an outcast who becomes an odd man in

If you have ever felt like a misfit in school or been paralyzed by your family’s imposing expectations, if you have ever obsessed about your appearance or panicked about choosing a career path, if you have ever wondered if every single thing to which your body is exposed, from egg yolks to X-rays, might harm you, then you may be surprised to find a kindred spirit in The Man in the Gray Flannel Skirt.

Growing up in sunny La Jolla, California, Jon-Jon Goulian was a hyperneurotic kid who felt out of place wherever he turned, and who, in his own words, was forever on the verge of “caving in beneath the pressures of modern life.” From his fear of competition to his fear of pimples, from his fear of sex to his fear of saturated fat, the range and depth of Jon-Jon’s phobias were seemingly boundless. With his two older brothers providing a sterling example he believed he could never live up to, and his stern grandfather, the political philosopher Sidney Hook, continually calling him to account for his intellectual failure, Jon-Jon, feeling pressed against the wall, wracked with despair, and dizzy with insecurity, instinctively resorted, for reasons that became clear to him only many years later, to a most ingenious scheme for keeping conventional expectations at bay: women’s clothing! Ingenious, perhaps, but woefully ineffective, as Jon-Jon discovers, again and again, that behind his skirt, leggings, halter top, and high heels, he’s still as wildly neurotic, and as wracked with anxiety, as he’s always been.

In this hilarious and heartfelt memoir, Jon-Jon Goulian’s witty and exuberant voice shines through, as he comes to terms with what it means to truly be yourself.