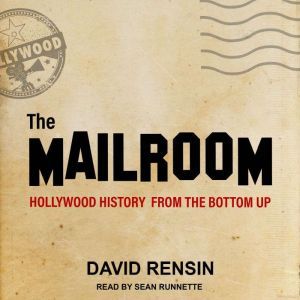 The Mailroom: Hollywood History from the Bottom Up

It's like something out of a Hollywood potboiler: start out in the mailroom, end up a mogul. Only for dozens of Hollywood's brightest, it happens to be true. Some of the biggest names in entertainment—including David Geffen, Barry Diller, and Mike Ovitz—began as trainees in musty talent agency mailrooms. Now, in this fascinating new book, veteran Hollywood writer David Rensin travels behind the scenes and through sixty-five years of show business history to tell the real stories of the marvelous careers that began—and in some cases ended—in the mailroom. Based on more than two hundred interviews, Rensin unfolds the never-before-told history of an American institution—in the voices of the people who lived it. Through seven decades of glamour and humiliation, lousy pay and incredible perks, killer egos and a kill-or-be-killed ethos, you'll go where the trainees go, do what they must do to get ahead, and hear the best insider stories from the Hollywood everyone knows about but no one really knows. The kids in The Mailroom have done it all: from hanging out with Elvis to delivering a senior agent's urine sample to the doctor; from pouring drinks for Sinatra to sending ice to Johnny Carson on the Nile; from crashing the Academy Awards ceremony to hoping to deliver more than just the mail to sexy actresses' homes. The Mailroom reveals why Harvard MBAs fight to turn down secure six-digit corporate salaries to start work at a major agency for less than $400 a week; what it takes to appease impossible bosses, outsmart the competition, and "agent" the agents; and how a hungry, star-struck kid can become the next Geffen or Diller by sorting mail, eavesdropping on crucial conversations, and trying anything to get noticed. Full of revealing stories and delicious dish, The Mailroom is not only a non-stop, engrossing listen, but a crash course, taught by the experts, on how to succeed in Hollywood through hard work, shrewd manipulation, and a hell of a lot of nerve. The Mailroom is classic Hollywood—a vibrant and complex tapestry of dreams, desire, exploitation, power, and genuine talent. If you want to know who rules Hollywood and how they got their power, if you want to know how to start with nothing and get ahead in any business, this is the book you must listen to.