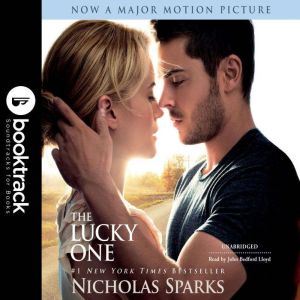 The Lucky One - Booktrack Edition

In his 14th book, bestselling author Nicholas Sparks tells the unforgettable story of a man whose brushes with death lead him to the love of his life. After U.S. Marine Logan Thibault finds a photograph of a smiling young woman buried in the dirt during his tour of duty in Iraq, he experiences a sudden streak of luck -- winning poker games and even surviving deadly combat. Only his best friend, Victor, seems to have an explanation for his good fortune: the photograph -- his lucky charm. Back home in Colorado, Thibault can't seem to get the woman in the photograph out of his mind and he sets out on a journey across the country to find her. But Thibault is caught off guard by the strong attraction he feels for the woman he encounters in North Carolina - Elizabeth, a divorced mother -- and he keeps the story of the photo, and his luck, a secret. As he and Elizabeth embark upon a passionate love affair, his secret soon threatens to tear them apart -- destroying not only their love, but also their lives. Filled with tender romance and terrific suspense, THE LUCKY ONE is an unforgettable story about the surprising paths our lives often take and the power of fate to guide us to true and everlasting love. *Booktrack editions are essentially a new genre of digital storytelling entertainment. Music and ambient audio are added to complement and enhance the audiobook experience. It is a synchronized movie-style soundtrack that complements the narration of existing audiobooks; the tempo and rhythm of the score harmonize with action, dialogue and the characters' emotional arcs.