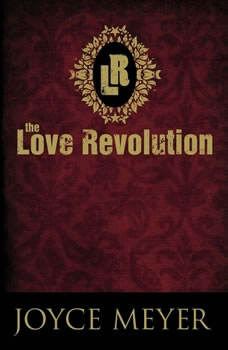 Joyce Meyer is not satisfied with the status quo. She believes that we each need to become a revolutionary and practice love every day. And if Joyce has her way, the revolution will spread - person by person, house by house, town by town, until the old culture of selfishness and greed gives way to a new culture of concern for others. The book is a revolutionaries' manual, a hands-on primer for bringing the Golden Rule to life in the twenty-first century. Meyer starts out by giving some stunning statistics. Right now...210,000 children will die this week because of poverty; 640 million children do not have adequate shelter; every day, 3,000 children are abducted into the sex-trafficking industry; every day, 16,000 children die from hunger-related causes. She goes on to say that although crisis is global, the solution is local. We can't solve the world's problems, but that isn't a reason to remain idle. LOVE REVOLUTION focuses on personal behavior on the local scale. It's not just a call to action; it is a call to being: being the person who goes out of your way to encourage someone who's out of hope; being the one who smiles at a stranger; being the one who is willing to do something for nothing. The paradox: when we do something for nothing, what we often get is something far greater.