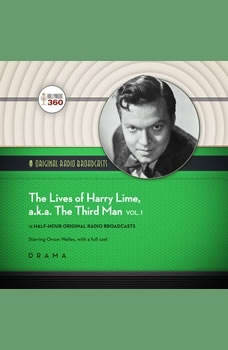 Made as a prequel to the hit film The Third Man, this radio show was created to follow the adventures of the popular character Harry Lime, played here, and in the movie, by Orson Welles.The 1949 film The Third Man won an Academy Award and was an international success, called "magic" by Roger Ebert and "one of the finest films ever made" by the New York Times. Written by New York Times bestselling novelist Graham Greene and directed by Carol Reed, the production starred Joseph Cotten as Holly Martins, an America who travels to postwar Vienna at the request of his old friend Harry Lime, played by Orson Welles. But it was the character of Harry Lime who nearly stole the show.While living in London, Orson Welles became acquainted with producer Harry Alan Towers, who convinced Welles to appear in a radio series based on his character in The Third Man and to be titled The Lives of Harry Lime. Since Lime meets his end in the sewers of Vienna in the movie, Towers, with Welles' involvement, decided to make the radio show a prequel.Produced in England and recorded in London's IBC Studios, The Lives of Harry Lime had an authentic continental flavor, with adventures taking place in such exotic locales as Paris, Rome, Venice, Tangiers, and the French Riviera.Thanks to brilliant scripts, expertly performed by Welles and a stock company of talented actors, the underworld activities of Harry Lime and his always-questionable associates make for great entertainment. Episodes included in this collection are "Too Many Crooks" (3 Aug 51), "Clay Pigeon" (17 Aug 51), "A Ticket to Tangiers" (24 Aug 51), "The Bohemian Star" (7 Sep 51), "Love Affair" (14 Sep 51), "Rogue's Holiday" (21 Sep 51), "Work of Art" (28 Sep 51), "Operation Music Box" (5 Oct 51), "Golden Fleece" (12 Oct 51), "Blue Bride" (19 Oct 51), "Every Frame Has a Silver Lining" (26 Oct 51), and "Mexican Hat Trick" (2 Nov 51).

The Lives of Harry Lime, a.k.a. The...
Classic Radio Collection