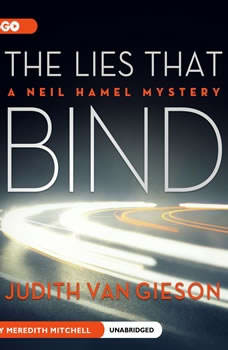 The Lies That Bind: A Neil Hamel Mystery

How could you forget whether or not you murdered somebody? That's exactly what Albuquerque lawyer-cum-sleuth Neil Hamel asks herself when she takes on the defense of an elderly client who can't remember whether she ran over the girl her car surely did kill. Early in the morning of November 1st, Neil and her boyfriend, the Kid, are shaken out of their post-coital bliss when they find a surprise visitor at Neil's apartment door. The visitor is Martha Conover, a pinched, elegant older woman who looks askance at Neil's "just-had-sex aura" but still pleads for her help. Martha's been accused of running over Justine Virga, the girl who accidentally killed her grandson, Michael, in a car crash three years-to the day-earlier. Though Justine's crushed corpse is found outside Martha's home and Martha's car bears an incriminating dent, Neil gradually discovers clues from Martha's prim past and Justine's wild one that point to other suspects, from drug dealers to South American death squads to Michael's Latino father, wronged two decades earlier by Martha's bigotry. While Neil searches for Justine's killer, she treats us to her wry take on every stratum of today's Southwest, from its breathtaking landscape to the real estate boondoggles that the S&L crisis has inflicted upon it, from Santa Fe's polo set and new age entrepreneurs to a homeless man who coaxes poetry out of used typewriters. Shamus Award Nominee for Best Novel.