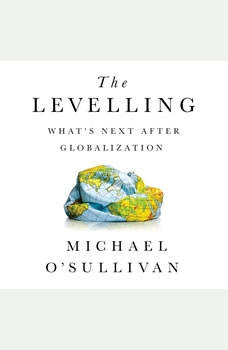 The Levelling: What's Next After Globalization

A brilliant analysis of the transition in world economics, finance, and power as the era of globalization ends and gives way to new power centers and institutions. The world is at a turning point similar to the fall of communism. Then, many focused on the collapse itself, and failed to see that a bigger trend, globalization, was about to take hold. The benefits of globalization--through the freer flow of money, people, ideas, and trade--have been many. But rather than a world that is flat, what has emerged is one of jagged peaks and rough, deep valleys characterized by wealth inequality, indebtedness, political recession, and imbalances across the world's economies. These peaks and valleys are undergoing what Michael O'Sullivan calls "the levelling"--a major transition in world economics, finance, and power. What's next is a levelling-out of wealth between poor and rich countries, of power between nations and regions, of political accountability from elites to the people, and of institutional power away from central banks and defunct twentieth-century institutions such as the WTO and the IMF.O'Sullivan then moves to ways we can develop new, pragmatic solutions to such critical problems as political discontent, stunted economic growth, the productive functioning of finance, and political-economic structures that serve broader needs.The Levelling comes at a crucial time in the rise and fall of nations. It has special importance for the US as its place in the world undergoes radical change--the ebbing of influence, profound questions over its economic model, societal decay, and the turmoil of public life.

Is Wall Street bad for Main Street America? In looking at the forces that brought our current administration to power one thing is clear: much of the population believes that our economic system is rigged to enrich the privileged elites at the expen...

Pride, greed, and power have driven men to do the unthinkable–including selling out their nations and unsuspected citizens to the most corrupt and destructive “invisible” global leaders on Earth. But how did this happen on American...

Nothing Is True and Everything Is Possible: The Surreal Heart of the New Russia
by Peter Pomerantsev

In the new Russia, even dictatorship is a reality show. Professional killers with the souls of artists, would-be theater directors turned Kremlin puppet-masters, suicidal supermodels, Hell’s Angels who hallucinate themselves as holy warriors,...

What Will You Learn From this audiobook? Tackling 9 specific financial myths, Killing Sacred Cows is a must for mission-driven individuals. It plainly reveals these shocking truths kept hidden by the traditional financial industry: A 401(k) is no...

The Upside of Inequality
by Edward Conard

From the New York Times-bestselling author of Unintended Consequences comes another bold and contrarian book by the man who famously defended capitalism and the one percent at the height of the Occupy movement. Conventional wisdom says income i...

Wall Street legend and bestselling author Jim Rogers offers investing insights and economic, political, and social analysis, drawing on lessons and observations from his lifetime in the markets.  Jim Rogers, whose entertaining accounts of his t...