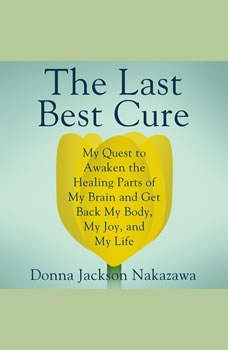 The Last Best Cure: My Quest to Awaken the Healing Parts of my Brain and Get Back My Body, My Joy, and My Life

One day Donna Jackson Nakazawa found herself lying on the floor to recover from climbing the stairs. That's when it hit her. She was managing the symptoms of the autoimmune disorders that had plagued her for a decade, but she had lost her joy. As a science journalist, she was curious to know what mind-body strategies might help her. As a wife and mother she was determined to get her life back. Over the course of one year, Nakazawa researches and tests a variety of therapies including meditation, yoga, and acupuncture to find out what works. But the discovery of a little-known branch of research into Adverse Childhood Experiences causes her to have an epiphany about her illness that not only stuns her-it turns her life around. Perfect for readers of Gretchen Rubin's The Happiness Project, Nakazawa shares her unexpected discoveries, amazing improvements, and shows listeners how they too can find their own last best cure.