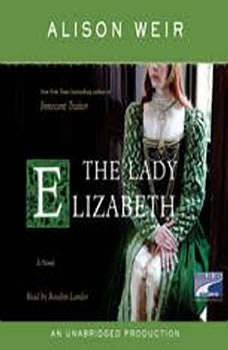 Following the tremendous success of her ﬁrst novel, Innocent Traitor, acclaimed historian and New York Times bestselling author Alison Weir turns her masterly storytelling skills to the early life of young Elizabeth Tudor, who would grow up to become England’s most intriguing and powerful queen.

Before she is three, Elizabeth learns of the tragic fate that has befallen her mother, the enigmatic and seductive Anne Boleyn, and that she herself has been declared illegitimate, an injustice that will haunt her all her life. What comes next is a succession of stepmothers, bringing with them glimpses of love, ﬂeeting security, tempestuous conflict, and tragedy. The death of her father puts the teenage Elizabeth in greater peril, leaving her at the mercy of ambitious and unscrupulous men. Like her mother two decades earlier, she is imprisoned in the Tower of London–and fears she will also meet her mother’s grisly end. Power-driven politics, private scandal and public gossip, a disputed succession, and the grievous example of her sister, “Bloody” Queen Mary, all cement Elizabeth’s resolve in matters of statecraft and love, and set the stage for her transformation into the iconic Virgin Queen.

Sweeping in scope, The Lady Elizabeth is a fascinating portrayal of a woman far ahead of her time–whose dangerous and dramatic path to the throne shapes her future greatness.

The Dressmaker
by Kate Alcott

Just in time for the centennial anniversary of the sinking of the Titanic comes a vivid, romantic, and relentlessly compelling historical novel about a spirited young woman who survives the disaster only to find herself embroiled in the media frenzy...

Speaking from Among the Bones
by Alan Bradley

NAMED ONE OF THE BEST BOOKS OF THE YEAR BY NPR • NEW YORK TIMES BESTSELLERFrom award-winning author Alan Bradley comes the next cozy British mystery starring intrepid young sleuth Flavia de Luce, hailed by USA Today as “one of the mo...

By the #1 New York Times bestselling author behind the Starz original series The White Queen, a riveting new Tudor tale featuring King Henry VIII’s sixth wife Kateryn Parr, the first English queen to publish under her own name.Why would a woma...

Weird does a lovely job of incorporating voice and possible experiences into this novel. I enjoyed getting to know the Elizabeth who might have been and her relationships with Mary and figures we dont often hear much about. I gave this 4 stars only because the early sections of the dialogue and behaviors of young Elizabeth are rather unbelievable. Even when taken into account her obvious intelligence and the level of skills that might be aquired in the era, readers cant help but feel skeptical. All in all, an interesting read.