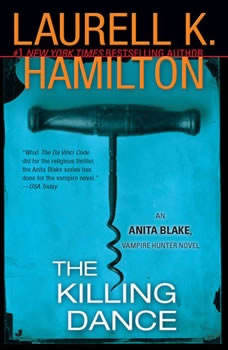 In the sixth adventure in the #1 New York Times bestselling series, Anita Blake’s unique skills make her a wanted woman—by vampire, by werewolf, and by a hit man...

Though she’s dating a vampire and a werewolf, Anita is keeping them at arm’s length. Which isn’t easy considering that Jean-Claude is the master vampire of St. Louis and Richard Zeeman is the sexiest junior high school teacher she’s ever seen.

Just to complicate Anita’s already messy life, someone has put a price on her head. Love cannot save her this time, so she turns to Edward, hit man extraordinaire for help. But finding the person behind it won’t be easy, because she’s made a lot of enemies—human and otherwise.

Anita doesn’t just date any two guys she dates two leaders of their supernatural communities. One rules with an iron fist, the other through peace and love. It’s a nice contradiction. As always, her life goes from one shoot-out to another. What is her bullet budget like? The dependable Edward is a great character that I hope we get more of. The Anita Series are quick, fast-paced reads. I always enjoy them.