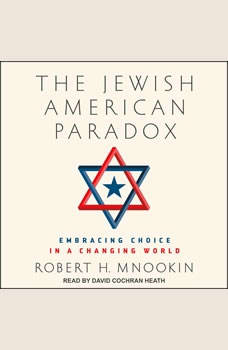 The Jewish American Paradox: Embracing Choice in a Changing World

The situation of American Jews today is deeply paradoxical. Jews have achieved unprecedented integration, influence, and esteem in virtually every facet of American life. But this extraordinarily diverse community now also faces four critical and often divisive challenges: rampant intermarriage, weak religious observance, diminished cohesion in the face of waning anti-Semitism, and deeply conflicting views about Israel. Can the American Jewish community collectively sustain and pass on to the next generation a sufficient sense of Jewish identity in light of these challenges? Who should count as Jewish in America? What should be the relationship of American Jews to Israel? In this thoughtful and perceptive book, Robert H. Mnookin argues that the answers of the past no longer serve American Jews today. The book boldly promotes a radically inclusive American-Jewish community—one where being Jewish can depend on personal choice and public self-identification, not simply birth or formal religious conversion. Instead of preventing intermarriage or ostracizing those critical of Israel, he envisions a community that embraces diversity and debate, and in so doing, preserves and strengthens the Jewish identity into the next generation and beyond.